It’s a very British thing to do. Queue in the rain and laugh about it.

So it was at Tattersalls July Sale earlier this month – which was held on schedule. 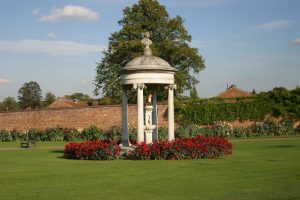 Numbers of humans in the Ring were strictly controlled. All entrances were closed off, with a rope across the horse entrance as soon as the horse had walked in, attended by two very experienced be-suited Tattersalls executives who would take bids from those unable to get into the ring and relay them instantly to the rostrum.

As readers of our columns over the years may know, bidders only go into the ring when they need to. The clearest example of this occurs at the Foal Sales when a veritable phalanx of foal men and women follows a popular one in to become a crowd at the acorns.

Under the strict COVID 19 conditions of Tattersalls recent sales, ring entry is achieved with a South Africa-style wristband, controlled by a large but friendly man working from a screen that tells him how many humans are inside at any given time, prompted by alerts in his ear when someone leaves by the only exit. It works. And when you’re wet already, who cares provided you think you will get in before the lot you want.

Relaying Birds From The Rain

Original entry to the 44-acre sale ground is achieved by having filled in a COVID19-related form a week beforehand. Cars on arrival are coned into lanes for photo ID presentation (or recognition in spite of masks on both sides “Hi David – love the long hair!”)  and temperature taking (twice).

The usual valet parking doesn’t happen but with fewer people, most of whom are professionals, forming orderly ranks of parked cars there was space for all. Purchases were made for 20 countries, but many were through their local agents or on-line with reps available to sort things out.

Other than the Ring, most interior spaces are closed off. The Buffet Room, or “Green Room” as it is unimaginatively called these days (green walls) is shut off entirely with its windows blacked out.  The Red Room – which was The Chifney Restaurant when we ran all the catering 20 years ago – was shorn of all table coverings and adornment. Well separated tables and significantly spaced chairs looked weird and were supplied with cutlery untouched by human hand delivered on trays.

The café “out back” was open but with maximum 6 customers inside instead of 60 and just a few tables inside. Plenty of tables were dotted around outside: mostly under a canopy or under trees which dripped into your tea. Beggars can’t be choosers when it comes to a cuppa.

Out on the sale grounds, touring geographically by box number to inspect, everything was fairly normal. Out of deference to the handlers to whose faces one gets pretty close when standing in, masks proliferated. That being said, the so-called cultural resistance to wearing masks is baffling, albeit following mixed messages coming from the WHO, scientists and politicians. Having myself lived in Japan for 18 years and been regularly in Hong Kong, Taipei, Seoul, Manila etc, putting on a mask at the first sign of a sniffle (to protect others in crowded buildings, lifts, pavements and urban walkways) is second nature.

The online option has of course saved the day, as has telephone bidding. But in a way “Welcome to the real world”.

Reconnoitring the countryside for horses and indeed marching about sales grounds requires a different sort of effort compared to searching for a piece of Meissen in amongst all the Spode, Wedgwood and Royal Crown Derby.  But they all start with a catalogue. In racing nations where agents do almost all the sales work it makes enormous sense to limit numbers attending sales under current COVID status and extend the digital options. 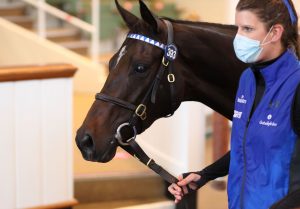 The 2020 July Sale had an astonishing clearance rate of 96% (a fair and accurate figure) in a very strong breeding stock market and the usual sort of mid-season horses in training demand. The overall median was down a shade, but the demand for broodmares and fillies for stud was very strong.

It was very hard to get the one you wanted.