“My” Liverpool as a young lad was a Second Division side of no great account until promoted in 1962. Bill Shankly put it all together with the great team inspired by Ian St John, all 5’7″ of him, and built around Ron Yeats and Tommy Smith. “Smith was not born”, said Shankly “He was quarried”. That defensive pairing gave way to such as Emlyn Hughes, Phil Thompson, Alan Hansen, later Sammy Hyppia and Jamie (“Sort that out, Sammy”) Carragher.

It is always strange when meeting a Liverpool fan without a Scouse accent. Like Newcastle United, Wolverhampton Wanderers, West Bromwich Albion, Nottingham Forest and – in London – Fulham, Millwall and QPR, Liverpool always retained the feel of a local club.

My father was born in Liverpool and although becoming a Londoner early on, for football he was an Evertonian, Goodison Park being actually only a stone’s throw from Anfield. He was still excited decades later by the exploits of (now) Hall of Famer Dixie Dean in the 30s.

In fact Everton were the original occupants of Anfield, moving out in 1892 when Liverpool  A.F.C was formed and Goodison Park was built. (A.F.C  for Association Football club – the formal name of the game. Hence the schoolboy abbreviation “Soccer”, as for “Rugger”, “Tenner” and so on).

For me, Everton was all about Howard Kendall (later Manager), Colin Harvey (later Assistant Manager to Kendall), and Alan Ball (World Cup Winner). Kendall had caught the imagination when becoming the youngest ever to play in the FA Cup Final, at left-half for Preston North End who lost in 1964 2-3 to West Ham, winning it for the first time with Bobby Moore and Geoff Hurst in the side. Everton’s 3-2 win against Sheffield Wednesday in the 1966 Final, shortly before England won the World Cup, was a brilliant match.

As a smaller boy I was introduced to Liverpool’s Three Graces, viewed from the Mersey, sailing up river on the newly commissioned ss Empress of Britain from her final fitting out, ready to take on passengers for her maiden voyage to Montreal. Visiting (from London) distant cousins over the years, the view from the river became more and more familiar as we took Mersey Ferry rides for recreation.

Liverpool was a rough old city in those days. Pub chucking out time was as scary as Glasgow, yet both cities have transformed into brilliant places to visit. In Liverpool, it started with music and football. The Beatles, Gerry and the Pacemakers, Cilla Black plus Bill Shankly’s Liverpool FC. ”They say that football is a matter of Life and Death. It is much more important than that,” said Shankly in his broad Scots accent, more than once.

The two awful disasters at Heysel and Hillsborough have marked Liverpool for life. Just last month, another landmark court ruling impacted on the families of the 96 who died at Hillsborough.

Liverpool’s greatest rivalry – hatred, some would say – is with Manchester United. The Reds v The Red Devils, 35 miles on the M62. And it is Manchester United that has the most international fans, with good and sobering purpose.

For marketing reasons, there are millions of “Man U” fans in China, Japan and some other East Asian countries. This is all to do with David Beckham. In fact, on one trip back to where I had lived for 18 years, my wife and I stood next to the enormous chocolate David Beckham in Shinjuku, Tokyo where the school girls swooned at the thought of the real one.

But that’s not the good reason. Manchester United is all about Munich. After Munich in 1958, until 1970 and beyond, any English person anywhere in the world only had to say “Bobby Charlton” to break the language barrier. Charlton, Dennis Viollet and others in hospital were shown in recovery on TV while the nation kept vigil over Sir Matt Busby who recovered and Duncan Edwards who did not. The similarly adored youngster Tommy Taylor had died instantly.

23 people were killed when that aircraft got stuck in the slush bringing the “Busby Babes” home from beating Red Star Belgrade, and others lost their careers. When, in the 70s, I attended a business gathering in one of the City of London’s ancient Livery Company Halls, one of the speakers told the story of the Munich crash as inspiration for “Rising from the Ashes”. It was less a case of “no dry eyes” but more of men in white tie and tails sobbing uncontrollably. 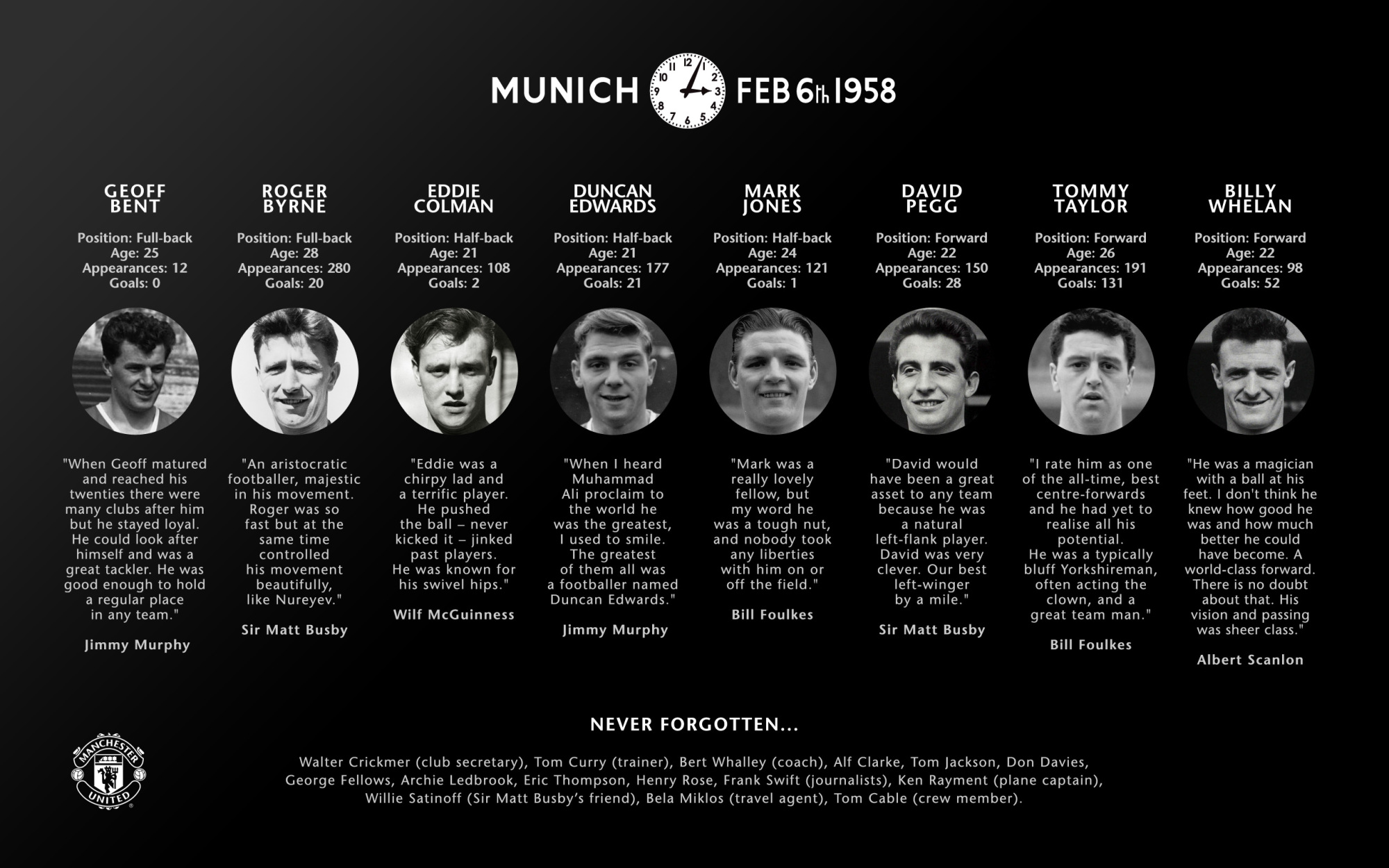 Those who lost their lives in the Munich Air Crash

When the surviving Babes came to play the 1958 Cup Final against Bolton Wanderers – spearheaded by England’s centre forward Nat Lofthouse – emotions were raw. Bolton won 2-0 with both scored by Lofthouse. The second was one of the most controversial goals in football history, still talked about now. Available on YouTube! (https://bit.ly/3qcjpiS)

The Manchester goalkeeper was Harry Gregg – the absolute epitome of unsung true hero. In the plane crash, with the aircraft smelling of fuel and partially afire, Gregg heard a cry and successfully found a baby. Then he went in again for the mother, pregnant. Then again for the father. And reportedly for several players.

At Wembley, Gregg parried the ball upwards and turned to catch it. Lofthouse shoulder charged Gregg and ball into the back of the net. Goal! 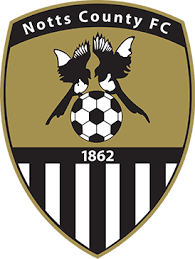 1958 may be a long time ago but the whole point of being a football supporter is to live with the fabric of “your club”. Not shout and scream on Twitter as some idiot so-called “fans” do about their own players (occasionally causing actual mental harm – witness the recent football boycott of all social media) but to be “Albion til I die” or “Millwall til I die” or, like famous jockey Hayley Turner, totally devoted to her local club Notts County (which has a Spion Kop). Nottingham Forest may be the great team of that city, having won back-to-back European Cups (now called Champions League), but Notts County is the oldest professional football club in the world, founded in 1862 – 3 years before Forest. Nottinghamshire Hayley would know that!

We are into the next generations after Munich by now of course, but all of this stuff gets passed down through families. Fathers and Mothers to Sons and Daughters. The folk lore and the famous names are all known. Twelve year olds know who they all were. At the protests outside Old Trafford after the ESL fiasco, you could see the real United supporters who scrimp and save to pay the huge ticket or season ticket prices staring down – as it were – their American owners who have done little to sustain the sheer class of that footballing institution since Sir Alex Ferguson stepped down.

Manchester United’s next “Babes” had clawed their way back to the top, becoming the first English club to win the European Cup in 1968 (Glasgow Celtic was the first British club, the year before)  with “The Holy Trinity” of George Best, Denis Law and Bobby Charlton. Surely, nothing in British club football has ever surpassed those three playing together.

For me, sitting in the stands at one London club or another much later in the ’90s with a big “ManU” fan (my daughter going through a phase), the Red Devils were Schmeichel flinging it wide to Kanchelskis who would beat one then pass to Mark Hughes. “Sparky” would hold it against massive pressure until slipping it perhaps to Brian McClair to go through, often taking the return and burning the netting with his shot.

Then came the kids. Jo and I watched two of them come on as substitutes – at QPR or maybe Brighton I think it was – with all around us saying that they looked bloody good. They were David Beckham and Paul Scholes, to be joined in the first team by the Neville brothers, Nicky Butt and one Ryan Giggs.  Roy Keane and Eric Cantona added special personalities to footballing genius.

Manchester United goals by Best, Charlton, Law, Hughes, Sheringham and Beckham are seared into the memory.