NOT EASY TO GET THE ONE YOU WANT

NOT EASY TO GET THE ONE YOU WANT

That’s what the previous article said about buying broodmares in foal at the Tattersalls July Sale on 9th July.

On 8th, it was pleasant enough with minimal rain looking at only 24 mares that might fit a single order for an English lady breeder who knows her stuff.

She breeds in France and might well use a son of SCAT DADDY, SEAHENGE, who won the Group 2 Champagne Stakes at Doncaster and was 3rd in the Group 1 Dewhurst (Newmarket), both at 2. SEAHENGE stands at Haras De La Haie Neuve which is where our purchase would go to live.

The budget for the new mare was up to 40,000 guineas preferably a bit less.

Inspections produced a short list of nine – but eight really because one was (a) by Scat Daddy and (b) even if we changed stallion, would make a ton of money in foal to HARRY ANGEL. They are not making Scat Daddys any more.

She made 130,000 guineas which joint topped this mid year sale. South African breeder-readers would note that her USA-small-black-type dam is half sister to TRAFFIC GUARD, a Listed winner and multiple Group placed in England and Dubai. 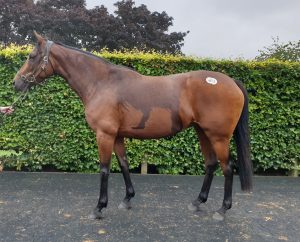 Cheveley Park Stud’s draft was attracting moths to the flame as they sought to reduce from 110 mares at home to 75, making room for some fillies off the track. For me, the pick was a daughter of my favourite KYLLACHY (as a broodmare sire to rival eventually his own sire PIVOTAL).

A few years ago, I went down on bended knee asking expert South African clients to buy for very modest money a Kyllachy half sister to a Falmouth winning Gr1 winner. That sister has since produced a 5x Stakes Winning stallion at stud in Ireland and the Kyllachy is dam in SA of two 5x winners with some small black type and, one hopes, more to come.

With this Kyllachy mare’s covering to Ulysses looking popular, I knew we had no chance and watched her make 60,000 guineas.

Later in the ring, a CASAMENTO mare with her own (French) black type had been singled out by the Stud Master in France. Whereas I loved the Roberto-ness via Red Ransom on the damside, Casamento was a bullock of a stallion and this mare was a very tall, heavy duty lady.

Urged from afar, we went a bit above budget because she has her own (French) black type but I was not unhappy to be underbidder. Her covering was late April (= late November in SA) and I thought she would have to be bred very carefully. She was in foal to TWILIGHT SON (by Kyllachy) – that was fine – but anything that might throw size might produce something enormous.

Only two left! Ah well. Been here before! Nil Desperandum!

There were reservations about our last-but-one and she made too much anyway – not good value – but then in came our last chance saloon. Hope sprang eternal.

She is a 7 year old mare by PIVOTAL (2nd or 3rd ranked broodmare sire in Europe depending on the category) out of a winning black type placed mare (2nd in the Gr2 Ribblesdale, Royal Ascot) by GALILEO (1st ranked broodmare sire). Her 2nd dam was a productive full sister to North American champion filly ARRAVALE (by ARCH, bringing Roberto again and there isn’t enough of that left anywhere except via CAPTAIN AL in SA). With a very early covering to DUTCH ART, another box was ticked.

And here she is at Cheveley Park before the sale

Perhaps because others had “done their money”, we got her for 37,000 guineas. The domestic French market is thoroughly respectful of middle distances (like the Ribblesdale and everything about Galileo) as are we and (most importantly) our successful client. She mostly races homebreds but selling some at Osarus, Deauville (now owned by Tattersalls).

Our client was doubly pleased because her Stud Master went overboard with delight (à la Mer avec Délice…?) when the mare showed up having crossed the Channel and chugged quite a long way south to Haras La Haie Neuve.  Halfway between Rennes and Laval on the road to Le Mans (as in 24 Hours).  Where SEAHENGE stands.

We look forward to driving down to see her foal when we can feel comfortable about doing that sort of thing.

And guess what? Her first foal bought as a foal by Rabbah Bloodstock (the Godolphin umbrella for all the relatives and friends) has turned up in France to be trained by Eoghan O’Neill.  Serendipity.

If you’d like AllanBloodlines to help you get the one that you want. Send an email to davidallan(at)allanbloodlines.com.