The six Scottsville Gr1’s were posted in the city where Marshall was a pupil at Maritzburg College. 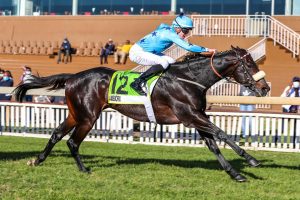 Ambiorix, tuned to the minute, was right up there in the vanguard with outsiders Gallic Chief (25-1) and Bard Of Avon (10-1), with Silver Salmon in contention.

Ambiorix kicked on best as they came to the 150m mark, and kept his momentum to beat Bard Of Avon by 2,10 lengths in a time of 69,23 secs. Gallic Chief held third.

Ferraris said: “I asked Mr Marshall if I could ride him like in his first race. He has a very relaxed running style. He pinged the gate and just kept rolling.”

Marshall added: “He’s a very decent horse who has always shown he has the ability. We took a gamble in not running him for so long, but it paid off. He strengthened up nicely. He’s also got a very good temperament. He doesn’t get above himself.”

The veteran trainer told the Sporting Post that his charge has pulled up well and will be nominated for the 1400m Gr2 Golden Horseshoe on Vodacom Durban July day.

“If he draws well enough, we will run,” he concluded.