Ashwin Reynolds to Elusive Fort: ‘Yes my boy, your son Kommetdieding also gave them carrots in the July’

Ashwin Reynolds is living the dream, and fulfilled one of his remaining racing bucket list items when he met Elusive Fort, the sire of Kommetdieding, at Black Swan Stud near Robertson on Sunday.

“I always wanted to go and see Elusive Fort and my friend Ricky Achmat arranged it so Walter and Fran Cowe invited us down.

“Me, him and Abe Mahlangu went and we had a lovely lunch and a really special peaceful day. Peter de Beyer was also there.

“It was a dream come true just to stand next to Elusive Fort. He’s 19 now but is just breath taking.”

Asked what effect the Vodacom July win has had, he summed it up like so: “I do get recognised now and again, and Andrew Fortune phoned and told me: ‘All my owners just want to own a horse with you because they say you are the lucky one’ ”.

But with regard to the recent sales, he is taking a breather for now.

“I have 23 unraced babies – three on my own and the others in partnerships. I said to my trainers these babies must come out now and I will buy again next year.”

Ashwin believes in spreading the load, as his stock is split between quite a few conditioners.

Apart from seven with the Crawford/Rix team he also has representatives with Andrew Fortune, MJ Odendaal, Adam Marcus and Peter Wrensch, as well as both Nathan and Glen Kotzen. 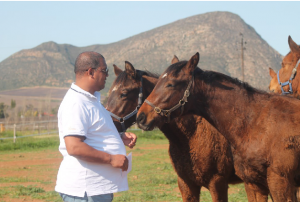 But at the moment one horse rules the roost, and the people’s hero is about to take his first steps towards what should be a thrilling Cape season.

“He’s relaxed. He just had his AHS vaccinations. He had a break but arrived back at the yard last week.

“I love the competition and challenge. I would love to race against Jet Dark, who we haven’t met yet, and Linebacker in the L’Ormarins Queen’s Plate. The game needs that kind of competition, and if my horse loses, I will take it on the chin.”

And he has words of sympathy for the connections of Linebacker, who he can expect to be going toe-to-toe with a few times over the coming season.

“I felt so sorry for Linebacker not winning champion three-year-old. He won everything he could and ran second in open company in the July.”

Ashwin deals in contract building jobs with government, and as we chatted he revealed he was on the way to Leeuwenhof, the official home of Cape Premier Alan Winde.

And the way things are going for him, perhaps he himself could be premier one day, I enquired with tongue in cheek?

Finally, Ashwin always maintained he wouldn’t contemplate selling his prize asset Kommetdieding before a G1 win was secured. So now that that dream has been attained, is any further news is in the pipeline?

“Nobody came to me with any offers since then. My one thing is I really don’t want him to leave the country.” And neither does anybody else in South Africa sir…. –tt