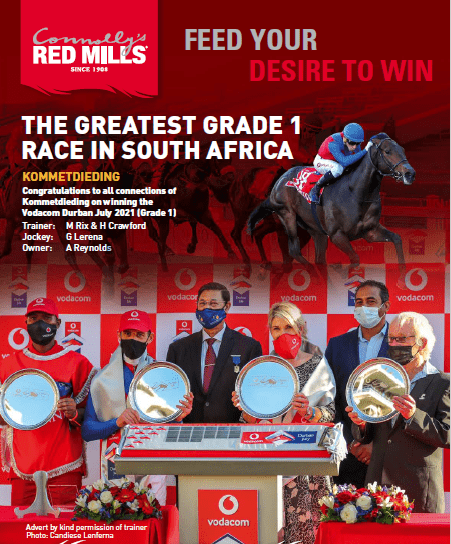 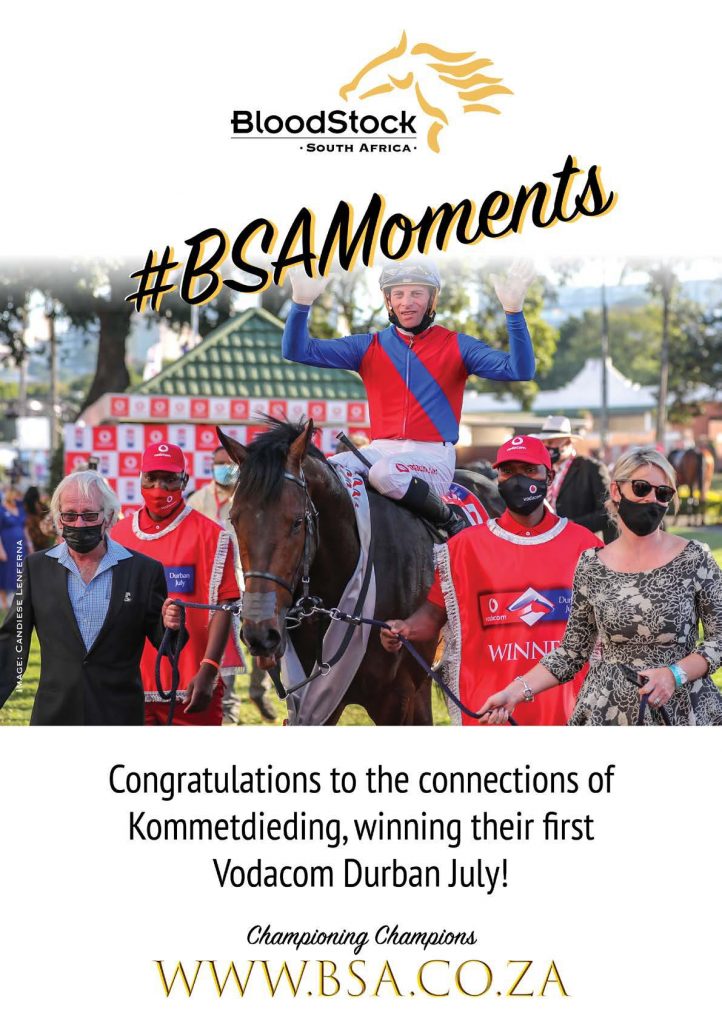 This was truly one for the people! Passionate racing supporters across the Cape Flats and the rest of South Africa celebrated a glorious victory in South Africa’s greatest race at Hollywoodbets Greyville on Saturday afternoon when bargain buy Kommetdieding soared to a glorious victory in the 125th renewal of the R2 million Gr1 Vodacom Durban July.

While it hardly matters in the greater scheme of a dream sporting moment for anybody involved in the great game, owner Ashwin Reynolds, who reportedly turned down tempting telephone number offers early on, became the first person of colour to own a Durban July winner and Kommetdieding is also seemingly the first horse with an Afrikaans name on the illustrious roll of honour.

But the emotions aside, what a terrific story of firsts for a horse that cost a mere R55 000 on the 2019 Klawervlei Farm Sale!

A winner of his first four starts, before being half put in his place with two feature places at his subsequent first two starts in the SA Champions Season pressure cooker, Kommetdieding showed he is a really special customer when winning from the widest gate on Saturday.

A first Vodacom Durban July runner for the youthful Michelle Rix and her veteran former jockey Dad, Harold, winning jockey Gavin Lerena put weeks of dietary challenges behind him as he chased the 53kg scale target to set the final stages in motion of a beautifully conceived plan come together. 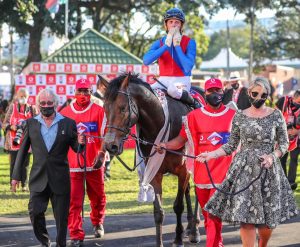 Gavin Lerena relaxed Kommetdieding early and into the straight went for an outside path as Sovereign Spirit lugged out on to him.

The favourite Got The Greenlight (5-2) ran a terrific race a neck away in third, with dual past winner Do It Again (7-1) a length away in fourth.

Winning rider Gavin Lerena paid tribute to owner Ashwin Reynolds and to his own family for ‘always having my back’.

“I made a forward move at the 800m and he simply grew under me,” added a breathless Lerena.

Trainer Michelle Rix thanked ‘an owner in a million’ and said she was honoured to enjoy a legend of Cape racing in her Dad Harold being there to share and enjoy the precious moment.

She thanked all the professional support behind the victory, including Billy Jacobson who rode all the work.

The top-class Gavin Lerena was called up to replace him after two SA Champions Season feature places. Cele chose to retain a dignified silence in the public domain and he no doubt experienced massively mixed emotions on Saturday.

A son of the superb treble Gr1 winner Elusive Fort (Fort Wood), the Klawervlei-bred Kommetdieding is out of the thrice winning Captain Al mare, Adorable. 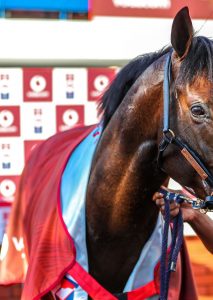 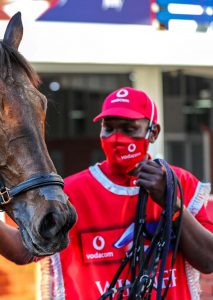 YOU CAN PICK YOUR FRIENDS…BUT FAMILY RULES!

There is plenty to like about the 2021 Gr1 Vodacom Durban July winner Kommetdieding’s pedigree. Not only is he a son of Equus Champion, and proven Gr1 sire, Elusive Fort, but the colt hails from one of the very best families in the stud book.

His dam Adorable, by Captain Al, won three and finished runner up in the Listed Gardenia Handicap, and she ranks as a three-parts sister to Gr1 Horse Chestnut Stakes, Gr1 Champions Cup & Gr1 Gold Challenge winner, Captain America who is sired by Captain Al.

Adorable’s dam was the high-class mare Dacha by Russian Fox, a dual winner of the now Gr3 Prix du Cap, with Dacha going on to produce a trio of black type winners.

In turn, Dacha was produced by Riding Light, a daughter of Prix du Jockey Club winner Top Ville, a top-class sire and broodmare sire of, among others, outstanding racehorse and sire, Montjeu and the Gr1 winners Dar Re Mi (dam of champion Too Darn Hot) Rewilding and River Dancer.

Riding Light, who was also dam of Gr2 winner Cruise Collection as well as the dam of Captain America, was a half-sister to Enchufar by Pharly, who also ended up in South Africa and who ranks as the dam of ten winners, including the useful galloper Boondoggle – by Roland Gardens.

Flash On, dam of Riding Light, was a useful filly who ran third in the Gr3 Prix Cleopatre and who is out of Never Say Die mare Crystal Light.

Crystal Light’s third dam is 1000 Guineas winner Picture Play, and her granddam is the hugely influential mare Queen Of Light by Borealis.

The latter, a high-class mare who won both the Child and Criterion Stakes, features as the dam of numerous top-class performers including British classic winners Fairy Footsteps, Light Cavalry, Moonshell and Royal Palace, as well as such standout Gr1 winners as Crocket, Desert Prince, Doyen, Greinton, Lawman, and Miss Finland, to name but a few!

This is also the family of Celebration Mile winner and promising sire Kodi Bear (Kodiac) -whose daughter Mystery Angel ran second in the 2021 Gr1 Cazoo Oaks.

Further back, Picture Play’s third dam Absurdity produced a trio of high-class performers in Absurd in the Middle Park Stakes and is a multiple champion sire, Black Jester by St Leger and Jest in the 1000 Guineas, Oaks.

The latter produced the game but short-lived Epsom Derby winner Humorist by Polymelus.

Kommetdieding, whose half-brother Quantum King ran second on debut, traces back directly to the taproot mare Paradoxical. The latter
also features as the fourth dam of one of history’s greatest broodmares La Troienne.

La Troienne’s numerous high-class descendants continue to make their mark around the world, and include current North American stars Maxfield, by Street Sense, and Essential Quality by Tapit, as well as high-class sires Flatter and More Than Ready. 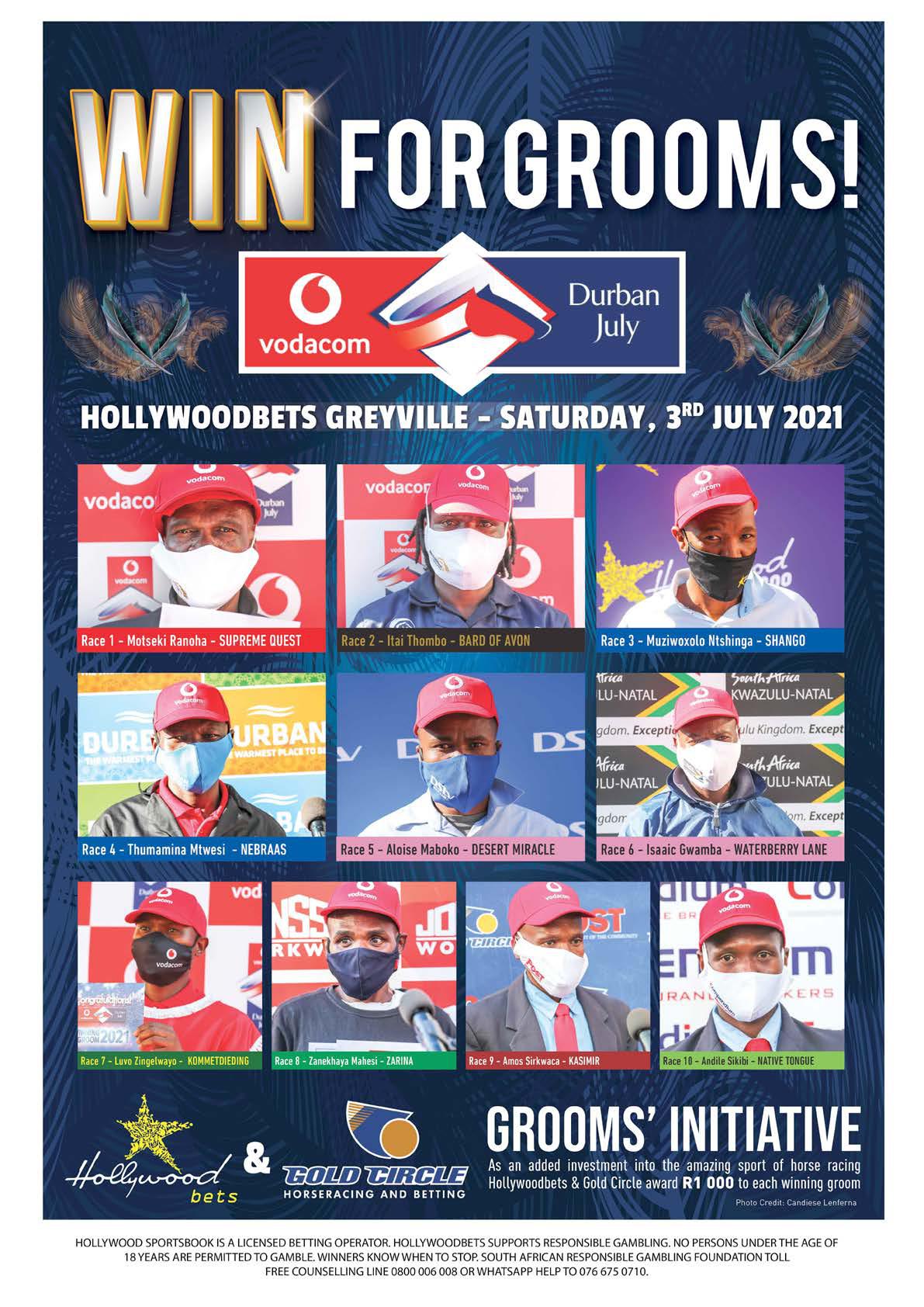 ‘Bred in Zimbabwe, she was sired by American blue-blood Kitalpha out of Breezing On, who was by English import Hallgate out of a mare sired by a South African-bred son of King’s Stand winner Drum Beat’ 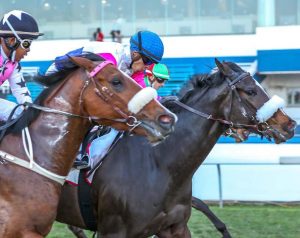 What a weekend it’s been for Barbara Sanne of Oldlands Stud. Delighted to have bred the dam of Vodacom Durban July hero Kommetdieding, Barbara again earned bragging rights as the breeder of Zarina, who ran out a surprise winner of the Jonsson Workwear Gr1 Garden Province Stakes thirty five minutes later.

Friendless in the betting at 75-1, Zarina flashed a devastating finishing burst to claim the scalps of two exalted rivals, Triple Tiara winner War Of Athena and multiple Gr1-placed Princess Calla.

Sired by Master Of My Fate, Zarina is also the second winner of this prestigious mile with a Zimbabwean background. The 2004 winner Battle Maiden was bred across the Limpopo by Geoff Armitage and trained by the late Neil Bruss. By Goldkeeper, she likewise prevailed in dramatic fashion by defeating none other than future Horse of the Year Ilha Da Vitoria in a photo finish.

Zarina is out of the Zimbabwean bred Mamalushka, and was raced by Barbara in partnership with the late trainer Ernie Anderson. Not the biggest of individuals, she scored her sole win as a five-year-old at Turffontein over 1160m.

Mamalushka’s pedigree is the epitome of international breeding. Bred in Zimbabwe, she was sired by American blue-blood Kitalpha out of Breezing On, who was by English import Hallgate out of a mare sired by a South African-bred son of King’s Stand winner Drum Beat.

Her sire Kitalpha was arguably one of the best-bred horses to stand in Zimbabwe. A son of Mr. Prospector and the legendary Miesque, this unraced own brother to champion racehorse and successful stallion Kingmambo enjoyed great success at stud where he topped the 2009 sires list and sired four champions including Horse of the Year Rebecca’s Fleet.

He spent six seasons in Zimbabwe before his repatriation to the States where he stood in Kentucky until his death in 2012 at age 13. Interestingly, he is also the broodmare sire of last season’s Zimbabwean Triple crown winner Lily Blue.

Successful in all of the Zimbabwe Guineas, Derby and Oaks, the daughter of Black Minnaloushe has twice scored on the Highveld this season.

Mamalushka’s dam Breezing On, a stakes-placed juvenile winner over the minimum trip, was very much her father’s daughter, the tip top sprinter Hallgate.

He counted Ascot’s Cornwallis Stakes amongst seven juvenile wins (he also lost one race in the boardroom) before adding the Diadem Stakes at three and the Palace House Stakes at four. He probably ran his best races in defeat, when beaten a neck by Green Desert in the Vernons Sprint Cup at Haydock and also finished third in a tight, threeway finish to the Gr1 Prix de l’Abbaye at Longchamp.

Breezing On was out of the prolific broodmare Gold Leaf, whose eight winners from 13 foals also included the fine sprinter Tobacco Trail and Bohemian Star, the dam of Guineas winner Bohemian Arch and stakes-placed Bohemian Flyer and None Better.

A daughter of the stakes winning Drum Beat horse Cover Note, Gold Leaf too, had flashed her precocity as a juvenile by winning the Nursery. Her dam was the modest one-time winner Gold Laurel, by Aureole’s disappointing son Laureate. Whatever talent Gold Laurel lacked on the racetrack, she certainly made up for as a broodmare and counted the stakes winners Gold Villan, Gold Crown, Gold Leaf and Gold Gremlin amongst her five foals. This formidable quartet dominated Zimbabwean racing in the eighties and earned their dam a Broodmare of the Year award. Furthermore, daughter Gold Gremlin became the dam of Zimbabwe’s 1999 Horse of the Year Goldie.

Zarina’s Gr1 victory in the Garden Province has revived a family which has gone rather quiet in recent times and underlines once again that while excellence in a pedigree may lie dormant, it has an uncanny knack of resurfacing.

Barbara reports that Mamalushka has a yearling colt by Quasillo, a weanling colt by Potala Palace, and is once again in foal to Zarina’s sire Master Of My Fate.

Remarkably, she is now one of a duo of brand new Gr1 producers amongst the Oldlands broodmare band as Kommetdieding’s dam Adorable is also back at the stud. Offered online last year, Barbara was quick to snap up the daughter of Captain Al for a bargain R8000. The mare dropped a Gold Standard colt in November and is safely in foal after visiting the July winner’s sire Elusive Fort.