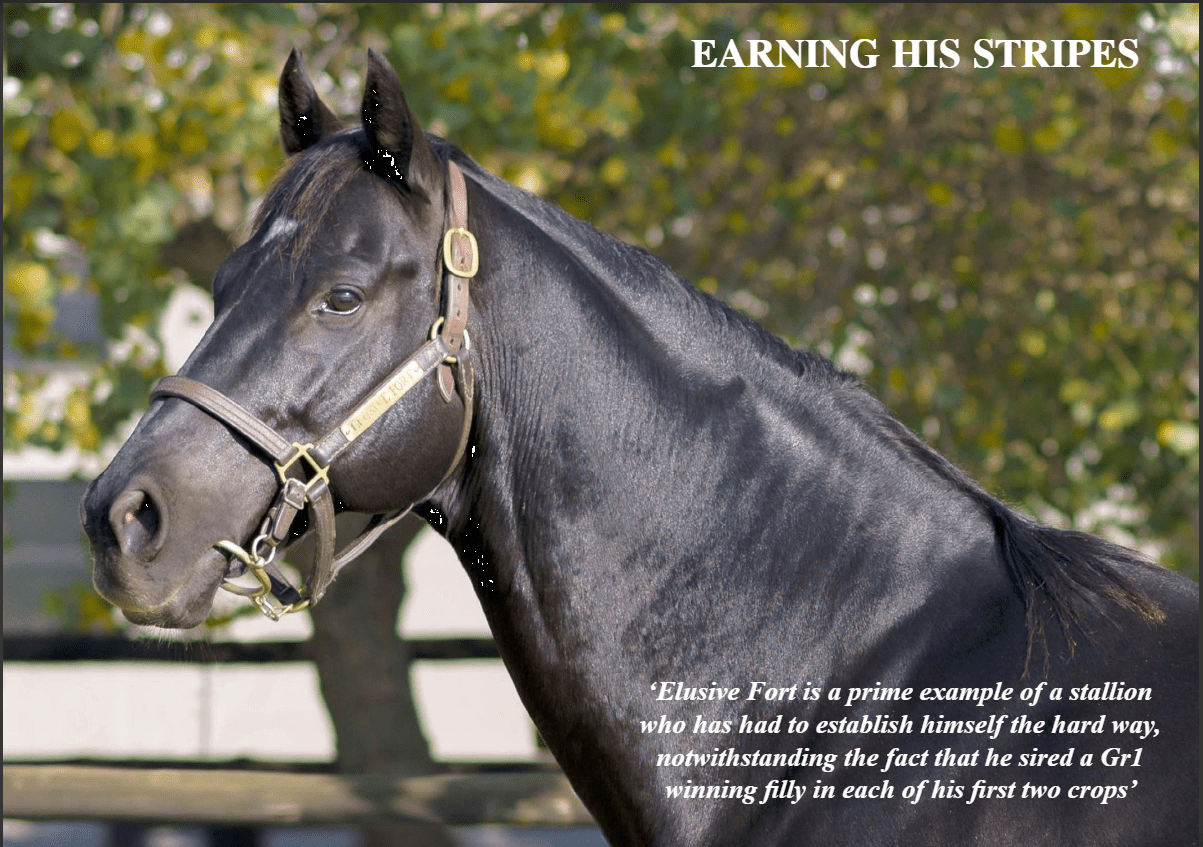 A stallion who is finally being given the respect he deserves is Elusive Fort, the sire of Sunday’s Gr2 Joburg Spring (F&M) Challenge winner Big Burn.

The son of Fort Wood jumped into the top ten for the first
time last season when he finished seventh on the General Sires list. A splendid achievement considering he had the second fewest runners.

In what was a sterling season, he sired five individual stakes winners, the star of which was his Gr1 Vodacom Durban July winner Kommetdieding.

Elusive Fort is a prime example of a stallion who has had to establish himself the hard way, notwithstanding the fact that he sired a Gr1 winning filly in each of his first two crops.

First-crop daughter Siren’s Call won the first two legs of the Triple Tiara and went down by a neck in the third leg, the (then) Gr1 SA Oaks. Second-crop daughter Lauderdale proved more precocious and capped her juvenile season with victory in the Gr1 Thekwini Stakes. His next two top level winners are both males – the SA Derby hero Out Of Your League, and of course, Kommetdieding.

The hallmark of a versatile stallion is his ability to sire progeny who excel over a wide range of distances, and in that respect, Elusive Fort fits the bill. His 14 stakes winners range from the sprinting siblings Freedom Charter and Ernie, to a classic Derby winner, and also the admirable stayer Chitengo, a dual winner of the Aquanaut Handicap.

That said, Elusive Fort Syndicate manager David Allan was quick to point out that “Big Burn won over 1450m and his other winner on the day scored over a mile. These are his average winning distances and with the colts having caught up the fillies in a bunch of stakes performances over the past couple of seasons, he is putting himself in the shop window big time”.

But back to Big Burn, who was bred by John Everett at his Narrow Creek Stud from the Argonaut mare Ignition Lady.

But back to Big Burn, who was bred by John Everett at his Narrow Creek Stud from the Argonaut mare Ignition Lady.

However, arguably his best efforts were in defeat. He ran Horse of the Year Rainbow Bridge to a neck in the Gr1 Gold Challenge and also chased home champion Jet Dark in the Gr1 Champions Cup.

What odds Big Burn’s trainer Paul Peter will plot a similar classic course for his newly-minted stakes winner, who looks set to add to her sire’s status?

In recognition of his earlier achievements, Elusive Fort has covered sizeable books these past three seasons and once again, will work his way through a good book of mares at Black Swan Stud.

“Technically he is not quite full insofar as we could fit in a small number,” added Allan. “But we certainly couldn’t take more of the kind of block bookings that characterised his pre-season trade which was much appreciated.”

Mindful of the tough economic climate, Elusive Fort stands at R15 000. That’s exceptional value for a stallion who was a champion on the track, boasts a fine pedigree and has done the job as a multiple Gr1 winning sire.

Back to Big Burn’s victory on Sunday. Receiving weight all round in the weight-for-age plus penalties 1450m feature, she is difficult to peg back when flying in front and she stepped up to the more testing trip on the inside track to provide a galloping lesson to her five rivals. 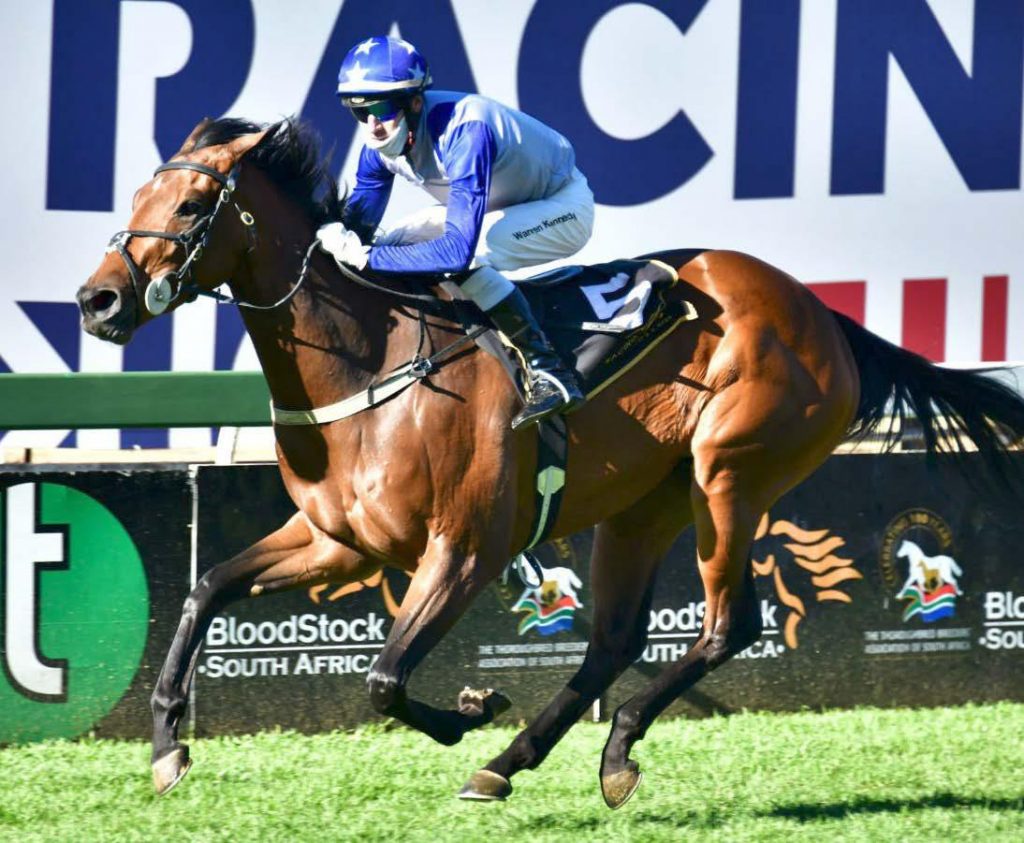 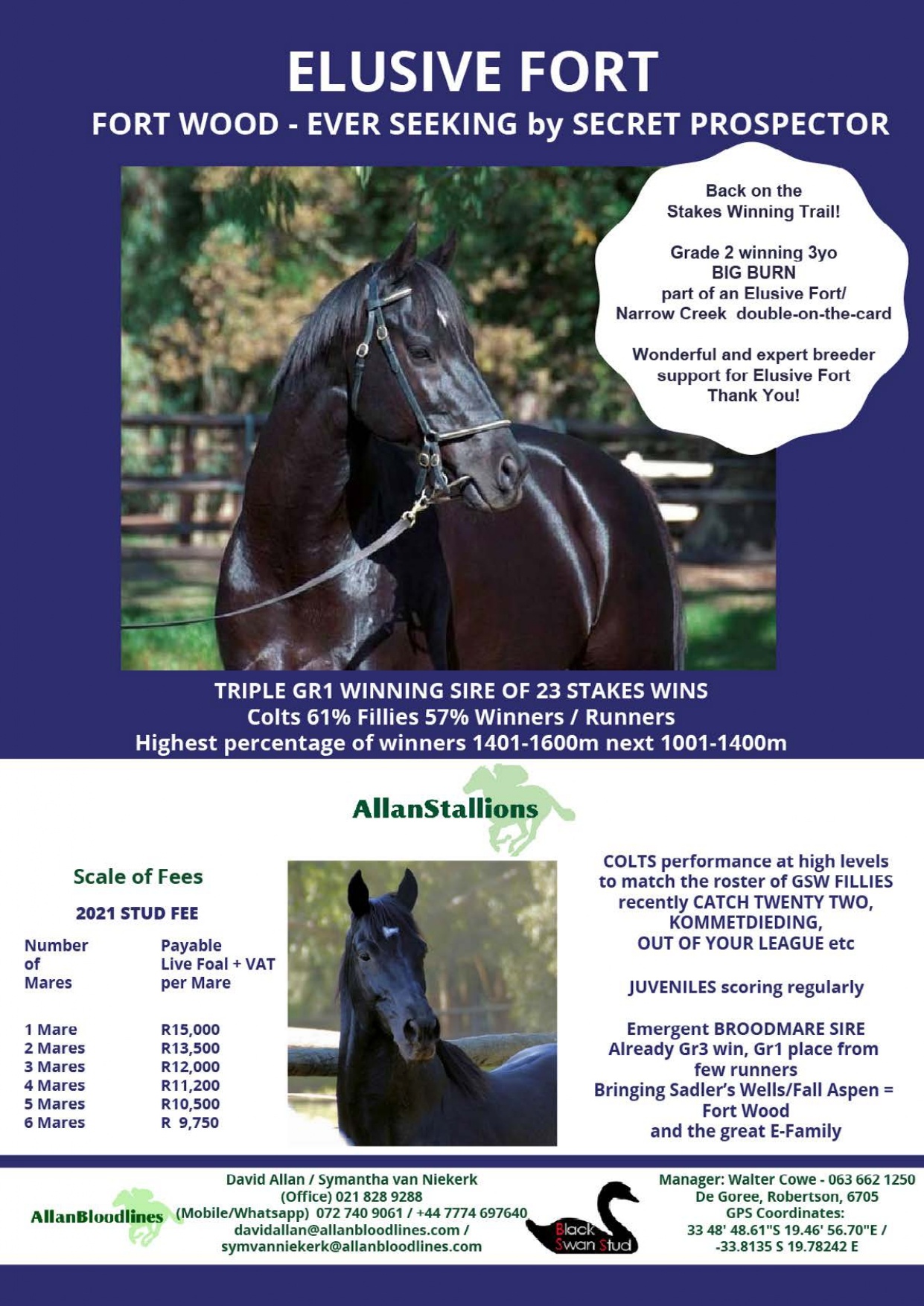