In terms of the underdog triumphing against incredible odds, the victory of Kommetdieding in Saturday’s Vodacom July is a story to rival that of Seabiscuit. A future Hollywood blockbuster in the making?

The only major roles still to be filled are groom Luvo Zingelwayo, and the tragic one of Sihle Cele.

Naturally the Kommet can just play himself.

We can call the movie Kommet-Jou Lekker Ding, or Cometh the hour, Kommetdieding (groan).

So lets have a look at the main performers.

Kommetdieding
This is a story with plenty of heroes, but top billing obviously goes to the incredible athlete Kommetdieding.

Bought at the CTS/Klawervlei Farm Sale of 2019 of 2019, Michelle Rix has said the colt gave her a ‘warm and fuzzy’ feeling on first sight.

And since his first appearance – aptly the R225,000 Klawervlei Farm Sale race on 16 June last year – he has hardly put a foot wrong.

Although there have been setbacks along the way – he was off for over six months following his debut – and also missed the Cape Derby in January due to a minor ailment.

But the pure class was evident from his second start – when he came from last to beat a classy bunch of sprinters with ease over an inadequate 1200m.

The sky is now the limit for the Elusive Fort colt. 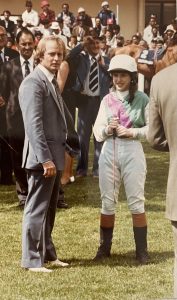 Harold and Di de Kock a long, long time ago

Anybody in racing who wasn’t over the moon for the craggy, gruff voiced veteran is clearly extremely hard-hearted.

In 2018 I wrote a profile on Harold, and he revealed that in 2015 he was “’down to seven or eight horses, half of which I owned myself. I even had to work at night in a casino to make ends meet”.

Things picked up but in January 2019 he suffered a serious stroke. At that stage most people would have doubted he would ever be back training again.

And as for producing a July winner two and a half years later…..now that is a plotline that nobody could ever take seriously!

As Harold concedes, a large part of the credit for the stable revival is down to his daughter: “She is far better at talking to people than I am,” he candidly admits.

The supremely unflappable Michelle takes everything in her stride. And even in the moment of triumph her pulse rate didn’t seem to have gone much over 70.

She did concede however post race that she had a bottle of French Champagne waiting for her at home.

I should hope so…..and the rest.

This man can never be accused of lacking guts. He has turned down several dizzying offers for his star. He simply stated that he is in this game to win a Grade 1. Well he can tick that off his bucket list now.

“I can’t be more over the moon” was his comment shortly after the race, sounding like he had already been at Michelle’s bottle of champagne.

The first ‘previously disadvantaged’ owner to win the Vodacom July. And it couldn’t have happened to anybody who deserved it more. 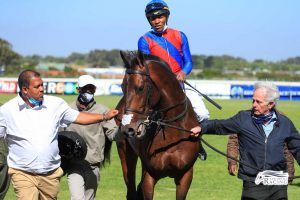 Every blockbuster contains a tragic figure, and unfortunately Sihle has to be it. He partnered Kommet to his first four wins but was jettisoned for the big one after going down twice to Linebacker.

He should hold his head high though, as he played a big role in getting the horse to the very top, and certainly did nothing wrong regarding his ride in the Daily News, in my humble opinion.

Likewise a villain is essential to any good plot, and Gavin Lerena has been portrayed as such in some quarters for ‘stealing’ Sihle’s big chance.

But this is twaddle. He is simply a professional sportsman who was offered a great opportunity to win the July and took it with both hands.

He deserves great credit in getting down to 53kg, which plenty were skeptical about. And at the end of the day he gave the new champ a virtually flawless ride from the ‘worst’ draw.

Which based on statistics over the past ten years is actually the best draw.

Pomodoro (2012), The Conglomerate (2016) and now Kommetdieding have all won from the extreme outside gate. And Belgarion was drawn 17 a year ago.

An understated presence, our equine hero’s groom has been there from the start, playing a essential supporting role.

Going into pre-production in the near future, this big-budget epic has plenty of plot twists, triumphs and tragedies. Expect the unexpected—nobody can predict where this saga will end up. –tt

Full sibling to Kommet on the way

According to Oldlands’ Barbara Sanne, Adorable (the dam of Saturday’s impressive Vodacom Durban July winner Kommetdieding), is enjoying life at Oldlands Farm and is safely in foal to champion Elusive Fort (below), the sire of Kommetdieding himself. 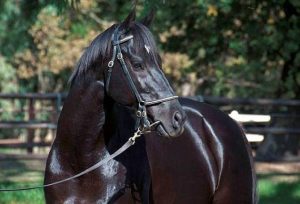 “I gave a big hug to his mom Adorable who lives back home at Oldlands thanks to Klawervlei, and is in foal to Elusive Fort again.

“We are also happy to announce that we are expecting a full sibling of Zarina – as Mamalushka is in foal to Master Of My Fate again!”

A daughter of Captain Al (whose son Captain Of All sired July runner up Linebacker), Adorable won three times and finished runner up in the Listed Gardenia Handicap. 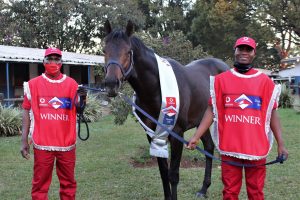