Milnerton veteran Vaughan Marshall’s continued with one of his most memorable SA Champions Seasons in recent times, when he clinched his third Gr1 Gold Medallion success at Hollywoodbets Scottsville this century, courtesy of the Oldlands Stud-bred Vercingetorix colt, Ambiorix.

Marshall won the Gold Medallion in 2016 with Always In Charge and in 2009 with Villandry.

He recently stamped his Vodacom Durban July aspirations when running 1-2 in the Gr1 Daily News 2000. 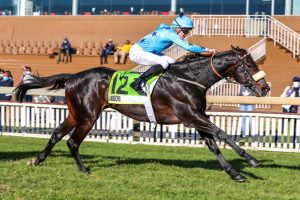 In an acid test on Sunday for the majority of the illustrious field of thirteen 2yo males that lined up in the weather delayed Gr1, the Avontuur-sponsored Luke Ferraris rode a cracker on the 2021 Listed Summer Juvenile Stakes winner.

Showing oodles of pace as Gallic Chief (25-1) and Bard Of Avon (10-1) kept it hot up front, Ambiorix (6-1) showed no ill effects after a 14 week break, and kicked again at the 200m as he went on powerfully to beat Ashley Fortune’s clearly talented debut winner Bard Avon by 2,10 lengths in a time of 69,23 secs. This was a marginally slower time than the fillies a half hour earlier.

In a race where nothing really kicked on behind the pace trio, Gallic Chief held on for third just over a length back.

The fancied Pyromaniac, Gimme A Prince and Good Traveller were never in the hunt.

He is a first male Gr1 winner for Maine Chance Equus Champion Vercingetorix (Silvano) out of the twice winning Indigo Magic mare, Our Darling.