British-based bloodstock agent David Allan, together with staunch South African supporters Seamus and Eileen Burns, had cause for celebration following the victory of juvenile Ambiorix (Vercingetorix) in last weekend’s Gr.1 Gold Medallion at Scottsville. Also successful in the Listed Summer Juvenile Stakes, the colt was ridden to victory by young Luke Ferraris, who will soon be on his way to Hong Kong, after news came through that he has been granted a six-month licence to ride in the former colony.

Trained by Vaughan Marshall, Ambiorix races in the colours of Burns Racing, of which Allan is the nominee. He purchased the colt from breeders Barbara and Ian Sanne’s Oldlands Stud at last year’s Cape Premier Yearling Sale for R250,000. At the current rate of exchange, that’s a Gr.1 winner for a bargain £13,000! Established for 18 years on the South African bloodstock scene, Allan Bloodlines has in the current season bred or bought 18 winners of 26 races, this of course being the pinnacle so far.

“Although not our first Gr.1-winning juvenile, such a milestone is immensely valuable and brilliant to see in these supportive colours,” commented Allan. “Competing with major owner/breeders is not easy – on the one hand they put immense amounts into the sport and industry and on the other are hard to beat. This is Vaughan’s third Stakes winner in a couple of weeks with more to come soon I am sure, and we hope that Ambiorix and perhaps others of ours will add to that tally.”

He went on to explain that “Now is the Hour” as far as UK owners and breeders in South Africa are concerned. Over 30 per cent of ownership in the Cape is British- and Irish-based, with others in Durban and Johannesburg, but the prospects are now as good as they have ever been due to several factors, prime amongst which are the Hong Kong Jockey Club’s direct investment in South Africa to press for EU’s near three-years-overdue processing related to exports, BetFred’s purchase of a large chain of betting shops in South Africa and of course, imminent increases in prize money that even at COVID levels, pays for significantly more training time than in the UK.

Allan added: “Yes, the national economy is still limited, but that only means that there is more upside in time. The core of good owners and breeders in South Africa has not gone away and although the industry is understandably timid about trumpeting a brilliant future, the numbers are clear and the structure solid.” 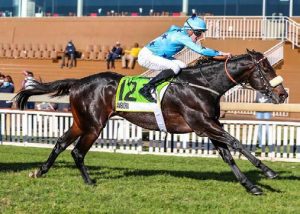 Ambiorix (Vercingetorix) won the Gr.1 Gold Medallion at Scottsville last weekend to the delight of British-based bloodstock agent David Allan, who secured the colt for R250,000 and is the nominee of the racing owner Burns Racing.