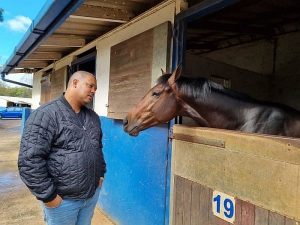 IT STARTED WITH A DREAM… and Ashwin Reynolds kept nurturing his own.

“You bought this ugly horse for me?!”

We’re staying with South Africa’s Durban July a while longer this week to tell you about Ashwin Reynolds, owner of last Saturday’s winner, Kommetdieding, how his dream became a reality and how the same is possible for all of us.

Our readers in other parts of the world will know that the Durban July is South Africa’s equivalent of the UK’s Derby, Australia’s Melbourne Cup or the Kentucky Derby in the US. It’s everyone’s ambition to win it, but just a few get to do it.

All the respective winners, however, had the dream in common, and many, including Reynolds, made small investments to get involved, and kept nurturing the dream. He kept watering the little plant and it bloomed unexpectedly!

Reynolds, who grew up in the lower-income area of Grassy Park near Cape Town, became the first person of colour to own a July winner so his racing colours will now be displayed on the wall of honour in Hollywoodbets Greyville’s Classic Room alongside many of South African history’s most famous racing silks.

He told Gold Circle’s David Thiselton: “I was saying to myself ‘Do you really know what you did?’ It is breath-taking. I can’t explain it. You can buy a horse for R10 million or R55,000, it doesn’t matter, because this is what it is all about. I am really chuffed to be part of South African history.”

He added: “From my heart I want to thank the people of the Cape Flats for shouting for this horse and I now hope people will be able to approach trainers to get into this game and enjoy it the way I am.”

Reynolds, as a young worker, made it one of his goals to own a racehorse by the age of 40. He started out on his own at age 16 and some years later had a two-year stint in the UK working as a labourer to start his currently successful building and maintenance business.

He first got involved with a 10% share in one horse, who won one race, and, as his business grew, went on to increase his interests with bigger shares.

One day he was sitting at home when Harold Crawford phoned him from a Farm Sale he was attending with his daughter and training partner Michelle Rix and asked if he could buy a horse for him.

Ashwin was taken back by Kommetdieding’s looks – he was a woolly little thing fresh off the farm and he replied, “This horse! You bought this ugly horse for me?!”

But in the next two weeks Kommetdieding just bloomed and continued to bloom and he named him such using the Cape Flats slang for “Bring It On!”

He described the excitement of that win and added, “Each and every win is a totally different type of excitement”.

Reynolds really gave wings to the words of the great athlete Michael Jordan, who said, “Obstacles don’t have to stop you. If you run into a wall, don’t turn around and give up. Figure out how to climb it, go through it, or work around it.”