Snowfall can accompany a fall of any kind – Turf Talk: 15 January 2018

IN January 1988, I flew from Tokyo – living there at the time – to Lexington, Kentucky for an important bloodstock sale at Keeneland.

The Northwest Airlines non-stopper to Chicago was a favourite Tokyo link to Eastern Canada and the U.S., avoiding having to go through New York, and worked well connecting to Cincinnati (then a pleasant hour’s drive to Lexington) or directly to the Bluegrass Airport in smaller aircraft.

On that occasion the temperature in Chicago was -40 and there would be no “pleasant drive” from Cincinnati. Our direct little shuttle aircraft took an hour to de-ice, eventually slithering successfully to a halt on a Lexington runway. At Avis, snow tyres and spare chains were extra.

All this was to do with the sale of 580 horses owned by Mr Nelson Bunker Hunt. It was a dispersal sale connected to his bankruptcy which resulted from having to defend legal cases in connection with his, and his brothers’, trading in the Silver Market. The silver price had gone from $11 to $50 then dropped like a stone on “Silver Thursday” with all sorts of legal charges resulting. Their fortune collapsed and the ramifications ran on and on. You can guess or google the rest.

At Keeneland, the Americanism “like a kid in a candy store” fitted perfectly. Young and fit (just like now), I marched around the excellent sale grounds in deep snow, -20 in the wind chill, fuelled by hot chocolate at every corner until joined by my UK contingent who had been snowed in overnight connecting as far south as Atlanta Ga.

Nelson Bunker Hunt had bred and raced such Global Greats as Vaguely Noble, Dahlia, Empery, Youth and Glorious Song – the latter dam of Singspiel, Rahy and Rakeen, the sire of Jet Master. The catalogue was a treasure trove of associations.

We bought two just-turned-2yo fillies. One – a winner at Kempton then dam and granddam of stakes and other winners – stayed with us in Newmarket until we put her down, frail and unable to go through another winter, at the age of 24. Her nickname is my most used password, so I’d better not tell you.

Of course, such a sale would attract people from all over the world as well as from all over the enormous U.S. of A. In the South Africa of 2018, with no simple export facility (yet) and with severe economic limitations (for now), a sale like that of 580 horses – or 380 or 280 – could not pull in the requisite buying capacity. Therefore the consequences of a major corporate fall close to home are being handled differently and will take time to evolve, no doubt with twists and turns to come.

But a little bit of that action will take place at a sale where snow also sometimes features.

Tattersalls February Sale in Newmarket is a true Happy Hunting Ground for AllanBloodlines. In the days when it was a One-Day Affair with maybe 230 lots, we might buy 5% of the catalogue – not very expensively – it’s not that sort of sale – but effectively enough to win most of the “glory” targets in so-called “small” racing nations in Central Asia year after year.

The breeding options are considerable and certainly valuable in the full-blown breeding nations. Now a Two-Day sale (164 fillies and 46 broodmares this time out of 446 lots), Godolphin, Juddmonte and Shadwell have interesting consignments and this year we shall see in amongst The Castlebridge Consignment the last of the Ballymacoll Dispersal, staged over several late 2017 sales and undoubtedly one of the most significant bloodstock redistributions of modern times.

In the upcoming February Sale – necessitating a flight for us soon after Met Day – there are three fillies owned by Coolmore and Mayfair Speculators in varying percentages.

Catalogued anonymously – a regular occurrence given that so many sales lots are anyway consigned by consignment companies not by breeders or trainers – they sit in the heart of The Castlebridge Consignment: a Listed winner whose yearling hammer price was 1.3 million guineas; a Listed placed winner and half sister to a Group 2 winner (€550,000 as a yearling); and a winning close relative to a Classic and other Gr1 win-ner (725,000 guineas as a yearling). 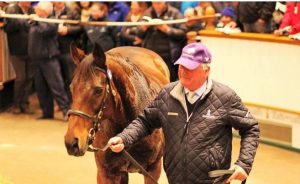 Ballymacoll Stud Manager Peter Reynolds and Islington do a lap of the ring at Tattersalls. Not a dry eye anywhere, certainly not Peter’s.

Actually there is another rather special offering in a different name – a colt owned by Mr M.J. Jooste and a different partner. We might be very cautious about taking on whoever wants the aforementioned fillies, but the colt, just turned 3, is of great interest to race on.

What we always recommend is for South African breeders to consider breeding stock from this sale and the July Sale at modest prices. Sitting in SA right now is a Gone West line grey (from Caro of which you cannot ever have enough) half sister to a Grade 1 winner and placed and five other dollops of black type with a good support family.

Her first SA foal is yet to run but she cost about the same sensible amount of money as the dam of Saturday’s 4+ lengths winner the long odds-on PACIFIC TRADER making Mum the dam of 2 from 2. She is the right type of CAPE CROSS from a black type mare with black type siblings and a 2nd dam of many luminaries.

It doesn’t always snow at Tattersalls February. Sometimes it can be very pleasant, well wrapped up. But it is a bit of a contrast to the Cape on Met Day which is why our purchasing clients don’t come to the sale. Seems to work. – tt.