The Dewhurst Diaries and a Coronation Derby – Turf Talk: 10 October 2016 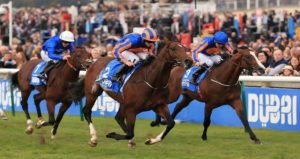 AFTER the launch party for new Cape stallion Fencing Master, feedback told us that two aspects of the event were particularly well received. One was of course the stallion and his stock that we paraded.

The other was the story of Fencing Master’s part in an Aidan O’Brien 1-2 in the Group 1 Dewhurst Stakes at Newmarket, last Saturday.

The 2016 renewal of the race, sponsored by Dubai, was run two days ago, 141 years after the first. The race is billed as Britain’s premier event for juveniles, run over 7 furlongs (1400 metres) of the Rowley Mile at Newmarket. The leading finishers will not be sprinters but will be aimed at Classics, starting with the 2,000 Guineas then The Derby. Mostly.

Not always. One rather good Dewhurst winner – Frankel – did not get up to the Derby distance. Without ever racing outside England, he established his peerless reputation in Group 1 Mile races, only stepping up to 2,000 metres in his last two contests.

One of those, the Juddmonte International at York is a leader in world rankings in terms of quality of winner and Frankel was no exception, bounding home by 7 lengths. He confirmed a pre-eminence to be matched only conceptually by those who argue that Sea The Stars “did it” at all the distances, including the Derby. 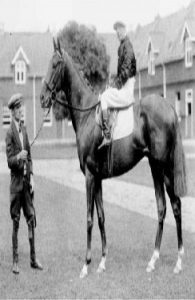 Other Dewhurst winners in recent years include Teofilio, New Approach and Dawn Approach and also War Command, an early son of War Front at stud.

Teofilio did not run at all at 3 and War Command did not really train on – much like Fencing Master – but the Dewhurst is enough to make a stallion.

Fencing Master’s Dewhurst effort – a neck second – was one year before Frankel. But going back farther, we see that the Dewhurst roll of honour includes Nijinsky, Mill Reef, Grundy, The Minstrel, Storm Bird, Diesis, Generous, Grand Lodge and Rock Of Gibraltar.

And much farther back: Ormonde and Hyperion stand out, plus Pinza whose subsequent Coronation Derby was very special, attended by a crowd of over half a million.

The Derby used to be a London holiday with Parliament adjourned and hundreds of thousands trooping out of town to the Epsom Downs to enjoy the Fair on the Hill and to be part of the great occasion.

Originally run on a Thursday, the race took place on the first Wednesday in June 1900-1994 after which it was switched to Saturday. It also took place on Saturday in some war and post-war years – and in the special Coronation Year of 1953.

Post-war food rationing did not end entirely until 1954, but the country was in ironic celebratory mood when confectionary rationing ended in February 1953 with sugar soon to be freed up in September.

The new Queen had ascended in 1952 on the death of her popular father and on 2nd June 1953 was crowned for a country eager for joy.

The young monarch had deepened the Royal bond with Londoners created by her parents refusing to leave London in the Blitz, and being seen out and about in bombed out areas. She had enlisted – as Subaltern Elizabeth Windsor – into army uniform and drove a First Aid truck during hostilities.

To cap all this, Her Majesty’s own colt Aureole (by Hyperion) was a Coronation Derby runner and joint favourite with Dewhurst Winner Pinza. No less than 27 runners started.

Aureole messed about awfully in the preliminaries and in one sense, the Royal Party was spoiled, with Aureole finishing second.

But actually there was more national rejoicing at Pinza’s win. The soon-to-be-knighted Gordon Richards had – amazingly – not won the Derby in 27 attempts. On Sir Victor Sassoon’s Pinza, he did so at the 28th time of asking and the crowd went bonkers anyway. A dead-heat would have been perfect. 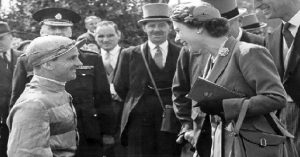 The day before yesterday, new stories were born. William Haggas sent out Rivet, part owned by his father in-law Lester Piggott who won the Dewhurst 10 times over a period of 27 years. Better than winning 1 in 3.

The main story now is the winner: Churchill– along with his pacemaker Lancaster Bomber (War Front) who stayed on again to finish 2nd. Not only does this pair of names evoke memories of the circumstances of the Blitz and the war effort, but also they combined for yet another in a rush of Aidan O’Brien/Coolmore 1-2 Group 1 finishes, with Churchill rushing to Guineas favouritism.

Ascot Stud will be celebrating as a Galileo out of a Storm Cat mare, just like their new stallion Global View.

And hey! Fencing Master in a 1-2 for Aidan O’Brien in the Dewhurst Stakes Group 1 the year before Frankel. Not too shabby either! – tt